Chemistry of Our Pets

Editor's Note: Give a warm welcome to guest blogger Sharon Neufeldt, who runs the very awesome i can has science? blog. Thanks, Sharon! -- RP

Though some of us might treat our pets like people, our beloved creatures are different from us on several levels, including their relationship with certain chemicals. For example, humans couldn’t care less about nepetalactone, but cats go crazy over the stuff.

Here are a few other potentially useful chemistry facts about our pets.

Guinea pigs. Like humans, but unlike most other animals, guinea pigs are unable to make their own vitamin C. This means that they have to acquire it through their diet, or else they can get scurvy, like sailors and pirates used to. 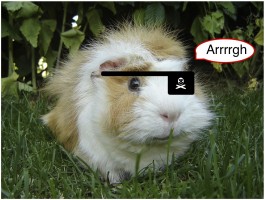 Vitamin C, which moonlights under the name ascorbic acid, is bio-synthesized by most animals from glucose. A series of enzymes is required to catalyze the various steps of the synthesis, and it turns out that humans, certain monkeys, and guinea pigs are missing the enzyme L-gulonolactone oxidase required for the penultimate step - an oxidation.

We humans, and our guinea pig pets, can get all the vitamin C we need through foods like oranges and strawberries, though we can also take supplements of synthetic vitamin C. Like the biosynthetic pathway, the industrial route to ascorbic acid starts with glucose; the critical oxidation step, however, is achieved with O2 over a Pt catalyst. 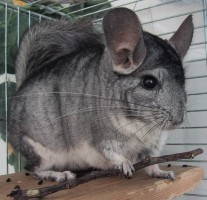 Chinchillas. These little fluff balls love doing two things: taking dust baths and chewing on wood. While the former is amusing to watch, the latter can occasionally spell disaster for both a chinchilla and its owner. Left to its own devices, this adventurous rodent can not only destroy an expensive piece of furniture, but can also unintentionally poison itself to death if it chews on the wrong type of wood.

Though some kinds of wood, such as aspen and apple, are safe for chinchillas, cedar wood seems to be notoriously dangerous. One possible chemical culprit is plicatic acid (below), which is found in the resin of cedar trees. This organic acid has been implicated as a cause of occupational asthma among lumber mill workers (humans), and some have speculated that this is also the aggravating agent for chinchillas. In 2009, a total synthesis of this natural product was published by Deng and coworkers, involving a key asymmetric epoxidation of a trisubstituted electron-poor olefin:

Desert Tortoises. OK, they’re not necessarily the most popular pet, but I speak from personal experience when I say they’re good ones! They live a really long time, they don’t eat or drink very much, and it takes them like an hour to make it across the yard, so it’s hard for them to run away. Oh, and they sleep for half the year.

Like many reptiles, tortoises have slightly different bathroom habits than mammals. These desert creatures have to be really good at conserving water, and one of the ways their bodies do this is by processing nitrogenous waste through a route that requires less water. Human bodies turn their excess nitrogen-containing waste into mostly urea, which is excreted in relatively dilute urine. Tortoises, however, convert most of their nitrogenous waste into uric acid, which is then excreted along with only tiny amounts of water. As a result, on the rare occasions that a tortoise goes #1, don’t be surprised to see white precipitate - it’s just uric acid.